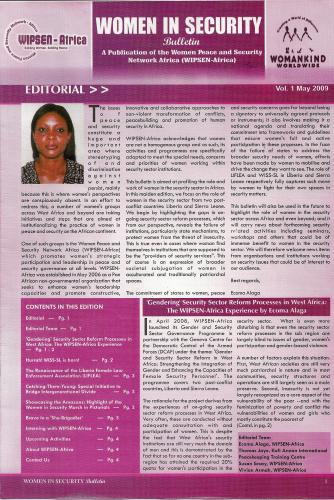 This bulletin is aimed at profiling the role and work of women in the security sector in Africa. In this maiden edition, we focus on the role of women in the security sector from two post-conflict countries: Liberia and Sierra Leone. We begin by highlighting the gaps in on-going security sector reform processess, which from our perspective, reveals the failure of institutions, particularly state mechanisms, to protect women from the threat of insecurity. This is true even in cases where women find themselves in institutions that are supposed to be the "providers of security services". This of course is an expression of women in acculturated and traditionally patriarchal spaces.

The commitment of States to women, peace and security concerns go far beyond a signatory to universally agreed protocols or instruments; it also involves making it a national agenda and translating their commitment into frameworks and guidelines that ensure women's full and active participation in these processes. In the face of the failure of states to address the broader security needs of women, efforts have been made by women to mobilise and drive the change they want to see. The role of LIFLEA and WISS-SL in Liberia and Sierra Leone respectively fully captures such move by women to fight for their own spaces in security matters.

This bulletin will also be used in the future to highlight the role of women in security sector accross Africa and even beyond; and it will carry news about forthcoming security related activities including seminars, workshops and others that could be of immense benefit to women in the security sector. We will therefore welcome news items from organisations and institutions working on security issues that could be of interest to our audience.

The WIPSEN-Africa and DCAF collaborated with key strategic partners to organise a series of one-day consultative meetings on gender and security sector reforms in Liberia and Sierra Leone from the 24th-25th and the 27th-28th June, 2008 respectively.

More specifically, the objectives of the consultative meetings were as follow:

1) To create a platform for female security sector personnel to mobilise and act collectively
to  ensure their concerns are incorporated, and that they actively participate in SSR
processes.

2) To facilitate dialogue between female security sector personnel, civil society women's groups
and other actors in the SSR process.

3) To develop a "women in the security sector" joint agenda and action plans on gender and
SSR which outlines existing gaps/needs that can be taken to address these needs.

This report gives an accout of deliberations during the four (4) consultative meetings organized. The first section highlights discussions with female security sector personnel in  Liberia. The second with female security sector personnel in Sierra Leone. The third is on the consultations with gender and SSR stakeholders in Liberia; and the fourth with stakeholders in Sierra Leone.

Complimentary views in the discussion with actors in the same categories --female ssecurity personnel or broader stakeholders -- are also captured for emphasis. Further, participants' recommendations for action are outlined. Given that the substantive part of the meetings was held under the Chattam House Rules, the report does not attribute statements contained herein to any participant.

1)   SSR oversight actors and other stakeholders: including parliamentarians; the national
defence and justice machineries; traditional leaders including paramount chiefs, ministries of
finance and development; Economic Community of West Africa States
(ECOWAS); United Nations agencies; and key groups engaged in the SSR process such
as Dyncorp and the Governance Commission (GC) in Liberia.

The report highlights the findings and feedback from the assessment, which is extremely vital for the development of future DCAF-WIPSEN-Africa project activities that respond to the highly challenging structural, policy and operational security needs on the ground.

A Field Guide for Practitioners and Policymakers 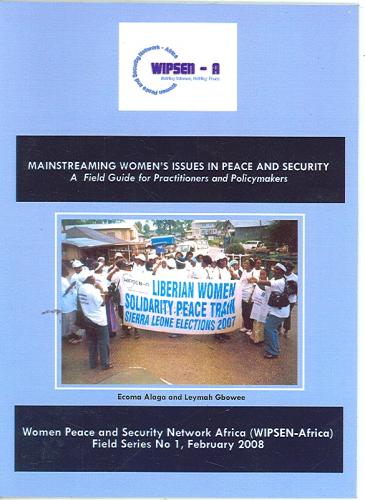 With the adoption of the United Nations Security Council Resolution 1325 on Women Peace and Security in October 2000, women's peace and security issues became hype at all levels and in all sectors. A good number of global, regional, sub-regional, national and grassroots initiatives have been launched by women practitioners, activists, academics, policymakers and implementers to make the Resolution a reality. In Africa additional rights-based instruments such as the Protocol to the African Charter on Human and Peoples' Rights on the Rights of Women in Africa (2003) and the Solemn Declaration on Gender Equality in Africa (2004) have also been adopted to further advance women's empowerment and gender equality. However, notwithstanding the plethora of normative frameworks that call and/or demand women's rights to peace and their involvement in peace and security processes, women continue to be peripherally represented in the governance of peace and security. Security institutions and structures --particularly in Africa-- are still largely male driven, oriented and dominated, and women are expected to become "masculine" in order to fit into these setups. The lack of political will and commitment on the part of governments to translate these instruments into action further inhibit the effectiveness of these normative frameworks and makes their realization far-fetched. Thus for civil society and particularly women's groups, it became imperative to take alternative measures in order that losses do not outweigh the gains made. Consequently rather than see these normative frameworks as an end in itself, they were seen as a means or vehicle for the achievement of the overarching goal of altering negative power relations, gender inequality and the disempowerment and impoverishment of women.

In  2004 a 'Women in Peacebuilding' Regional Conference was organized against this premise and brought together sixty-eight (68) representatives (mostly females) from civil society, the West Africa Regional Economic Community --ECOWAS, governments, donor agencies, academia and the media to develop Policy Recommendations for Mainstreaming Women's Issues into Peace and Security in West Africa. The policy recommendations development process was civil society driven/led and was meant to complement and operationalize existing frameworks on women peace and security in West Africa. The recommendations have been extensively disseminated over the last three years and have become a reference for particularly grassroots women and national gender (women) machineries working or seeking to work in the area of peace and security. Popular requests for the recommendations to be published as a handbook for field workers and policymakers led to the recent revalidation of the policy recommendations to assess its significance and validity. This field guide is an outcome of the feedback that was given during the validation exercise which held in May 2007 under the auspices of the Women Peace and Security Network Africa (WIPSEN-Africa) and with support from the Kofi Annan International Peacekeeping Training Centre (KAIPTC), the German Technical Cooperation (GTZ), the African Women's Development Fund (AWDF) and the Evangelical Lutheran Church in America (ELCA).

The Field Guide is intended to serve as a reference and is designed to orient practitioners and policymakers to core themes and ideas on how to integrate women and mainstream their issues into peace and security. The practical examples underlined are based on findings from the contemporary work of activists, practitioners and researchers on women, peace and security. It also benefits from and underlines the experiences, the work that has been and can be done by the United Nations, ECOWAS and its Gender as well as Peace and Security Structures, National Gender (Women) Machineries, Civil Society --particularly Women's Groups-- to bring about greater gender parity in peace and security. The Field Guide is by no means an all-inclusive or sole reference. It is based on the experiences and work of the delegates who

attended the Strategic Reflection Forum that was organized by WIPSEN-Africa; and is thus limited to examples from the West Africa sub-region. Practitioners and policymakers are urged to use this guide as an additional reference to complement other existing guides from within the continent --particularly those from other regions (East, Central, South and North Africa) and abroad. The Field Guide is also intended to serve as an impetus to further and more inclusive studies and documentation of the efforts being made towards mainstreaming women's issues in peace and security. Therefore this volume comes as a first edition. It is envisaged that it would be revised overtime to incorporate emerging strategies, best practices and lessons learned. For the present, it is our hope that the guide would be instrumental to furthering the efforts currently being made towards the empowerment and full participation of particularly grassroots women in the governance of peace and security at all levels.

We once again acknowledge and thank West African Women, Gender Machineries and ECOWAS for their contributions which have made the development of the Field Guide possible. The contributions of Sisters from Uganda and South Africa who also participated in the Strategic Reflection Forum is acknowledged and highly appreciated. We finally would like to thank our Donors and Strategic Partners --GTZ, AWDF and ELCA-- for their continued support and commitment to empowering women to participate in the decision making processes involved in the maintenance of peace and security at all levels --from the community, state, sub-region, continent and global.